Mass of Thanksgiving in Knock on October 6th 2017 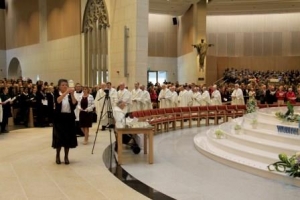 Knock Basilica was the venue on October 6th 2017 at 12pm for a wonderful Mass of Thanksgiving to celebrate the foundation of the Congregation of the Religious of Jesus and Mary and its 200 years of education in schools and colleges in 28 countries and five continents.

Students and Staff from the four primary schools, and four secondary schools in which the Sisters have worked since 1912 in Ireland joined with Sisters, past pupils, former Staff, parents, ex RJMs, families and friends in participating in the Mass. Over 2000 people assembled in the Basilica to give thanks to God for all that has been and to look forward in hope to the future. The main Celebrant was Rev. Fr. Michael McLoughlin from the Diocese of Galway, assisted by Bishop Emeritus Christy Jones and 18 other clergy who were past pupils or who had worked with the Sisters down through the years. Archbishop Diarmuid Martin, Bishop Drennan and Bishop Fleming sent their apologies.

Journeying with Claudine, woman of Faith, forgiveness and communion 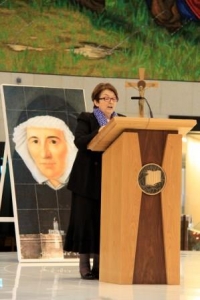 The theme of the Mass was “Journeying with Claudine, woman of Faith, forgiveness and communion”. The Congregation was founded by Claudine Thevenet in Lyons, France in 1818 in the aftermath of the French revolution. It was founded for the education of the young and to create school communities that nurtured the holistic development of young people. In 1842 it spread to India and on the 6th October there was a simultaneous gathering of Sisters from each Province of the Congregation in India to mark the occasion and to engage in a missionary conference.

Sr. Mary Mulrooney, Provincial of the Irish Province welcomed our pupils and staffs from Crossmolina, Dublin, Enniscrone and Galway. She invited into the sanctuary 7 pupils from each of the primary schools, carrying flags of the 28 countriess and these were reversed on a board which eventually revealed the face of Claudine Thevenet. 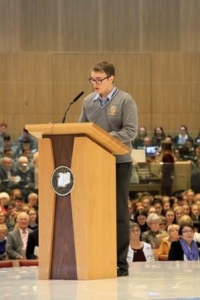 Choirs from our Parishes and schools provided the most beautiful music, (under the baton of Fiona Watts, and organist Marie Moore) the highlight of which were the solos sung by Sr. Mairin McDonagh rjm, Michael McGowan-Hannon and Darragh Jordan. The communion reflection was a hymn written specially for the occasion by Ms. Fiona Watts, from Gortnor Abbey titled “He waits in the Least”.

The Basilica was beautifully adorned with flowers and symbols created by Srs. Fionnuala and Marie and the Crossmolina Ladies Committee. A unique creation by Anne Marie Cawley past pupil of Crossmolina was a visual representation of one of Claudine’s favourite piece of Scripture “Unless the Wheat grain dies…it cannot yield fruit”. Her creation based on the wheat grain included many of St. Claudine’s sayings and the themes of the Bicentenary Mass.

The combined prayers and offertory procession included Dr. Eilis Humphreys, Executive Director of Le Cheile Schools Trust, members of Boards of Management, Parents Councils, Family of Jesus and Mary, sisters and students. After the Mass refreshments were provided by Patrick McGuinness catering and his team in St. John’s Centre.

Ms. Teresa Irwin, deputy Principal, on behalf of all gathered, thanked Fr. Richard Gibbons and Fr. Nigel Woollen and all the staff in Knock for accommodating us on the day and for the use of the most beautiful Basilica which was a fitting venue for the occasion. She also congratulated the sisters of Jesus and Mary for their contribution to education. She remembered those Irish Sisters abroad on mission and Sisters who are ill or in Nursing Homes. She concluded with the motto of the congregation “Praised forever be Jesus and Mary”. 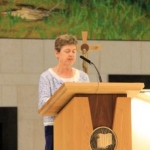 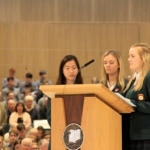 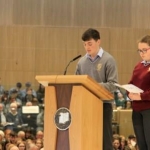 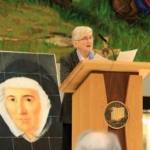 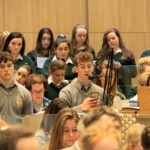 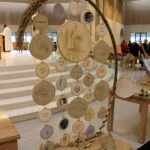